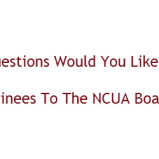 What Would You Like to Ask Nominees to the NCUA Board?

Potential NCUA Board Members should understand the cooperative difference. Co-Ops for Change has listed  some questions a regulatory nominee might consider, and we invite you to add your own questions to the list

In the worst years of the financial crisis, credit unions originated more than $525 billion in loans, compared with most other financial service firms, which largely pulled back on lending. Today, credit unions have more than  $1 trillion in assets, making them America’s second-largest depository system.

Yet, many have expressed concerns that since the crisis, NCUA has treated credit unions more like banks than member-owned and governed institutions. Effective regulation of cooperatives is dynamic, encouraging ongoing dialogue between the regulator and the regulated. It also considers the reality that loans made by credit unions to their members perform substantially better than similar loans to bank customers.

1. Bank regulators must balance the expectations of for-profit shareholders who seek returns vs. customers’ needs for competitive rates; and shareholders who benefit from high returns  vs. the public, which pays when high extraordinary returns result in bank failures.

Does the credit union regulator face the same types of conflict of interest as banks?

2. In the recent crisis, NCUA modeled its actions on the banking system, but it isn’t appropriate for cooperatives to be regulated like banks.

What role do cooperative principles have in credit union oversight?

3. Credit  unions’ federal tax exemption encourages members to start up and support local financial services. These financial resources are then paid forward to benefit future generations of member-owners without personal gain. Further, credit unions’ cooperative, self-funded structure allows them to act in a counter-cyclical manner in a crisis, providing credit when other firms cannot.

What role should regulators play in presenting the public benefits credit unions provide?

4. While NCUA initially thought otherwise, we now know the credit union system’s cooperative resources were adequate to supply the liquidity and cover the collective losses without government assistance.  Yet, NCUA shut off the self-contained credit union liquidity system provided by the Central Liquidity Facility, corporate system and their credit union owners.

How would you re-establish a cooperative liquidity solution for credit unions?

5. At the end of first-quarter 2013, the credit union system surpassed the thrift industry in total assets.

What is your vision for the role of these financial cooperatives in the American economy going forward?

6. The credit union community has voiced a number of concerns about NCUA’s regulatory activities over the past several years, including a lack of transparency, arbitrary supervisory actions, ever-rising costs, and the growth of new rules and regulations.

As an NCUA Board Member, how would you address these issues, letting credit unions know where you stand and what you want to accomplish?

7. Depositor regulation involves examination and supervision, deposit insurance, and providing backup liquidity. In banks, these roles are carried out by three separate; only the NCUA Board manages all three roles for credit unions.

Is it appropriate for these three functions to co-exist in one board without causing confusion over their roles? In a systemic crisis, which function is most central to stemming the uncertainty?

One Response to What Would You Like to Ask Nominees to the NCUA Board?