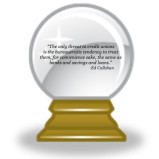 Before he left his position as Chairman of the National Credit Union Administration, Ed Callahan wrote to President Reagan, expressing his gratitude for the chance to serve credit unions and, importantly, emphasizing the difference between the financial cooperative model and the for-profit bank model. Ed’s letter speaks to the heart of Co-Ops for Change’s goal to encourage a regulatory environment in which credit unions may flourish and their member/owners may be well-served.

With the components of the credit union system in place and with credit unions free to create their own solutions to service and competitive pressures, 1984 became a showcase within which to observe the credit union phenomenon. In total contrast to other financial institutions, credit unions experienced spectacular gains in financial soundness and growth. I have been asked by members of Congress to explain this incongruity. I reply that credit unions were born in adversity; they sprang up during the depression; they flourished during World War II; and they have adapted remarkably to every set of economic circumstances since. When left alone, they return to what they do best: providing basic financial services to their members on the most convenient and cost-effective terms possible.

The only threat to credit unions is the bureaucratic tendency to treat them, for convenience sake, the same as banks and savings and loans. This is a mistake, for they are made of a different fabric. It is a fabric woven tightly by thousands of volunteers, sponsoring companies, credit union organizations and NCUA-all working together.

In 1984, the future of credit unions was returned to the hands of its proper owners. Credit union boards of directors have made, and will continue to make, individual and collective decisions from their vantage point on the front lines of the marketplace. The industry has crossed the $100 billion level; loans are up dramatically, with a 44% rise in the past two years; and problem credit unions are down to a most manageable number. The stage is set for tremendous initiatives in the credit union private sector. I look forward to the excitement of becoming a part of these growing successes.

Thank you for the opportunity to serve.

← What Would You Like to Ask Nominees to the NCUA Board?
Constitution Corporate FCU – Analysis →