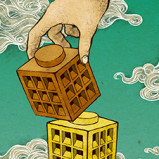 The publication of the corporate investments used to collateralize the NCUA Guaranteed Notes (NGN) funding program provides a factual basis for informed conversations about the Agency’s actions with the corporate network.  More importantly, this interim data should encourage all industry participants to learn from these events and find better solutions for the future.

The June 30, 2013, update of the U.S. Central Federal Credit Union securities shows that of the total $3.5 billion other-than-temporary-impairment (OTTI) future loss estimates, more than $2.3 billion is still unused.  The $3.5 billion is from the June 2010 balance sheet, which also showed positive capital of $310 million—even after these losses were expensed.

The initial principal for the investments taken for NGN collateral in October 2010 was $19.4 billion.   As of the June 2013 updates, this principal has been reduced by $7.5 billion. Of this amount, $6.3 billion is from principal pay downs and $1.2 billion from incurred losses, which are covered by the OTTI reserves.

The Cascade of Losses Caused by “Assuming the Worst”

The OTTI loss estimates were projected during the depths of the financial crisis. By immediately expensing possible losses as much as 20 years in the future, NCUA forced the members of U.S .Central to write off (extinguish) $300 million of paid-in capital and $1.684 billion of member capital accounts.  This $1.9 billion in potential losses was written off against the retained earnings and member capital of every corporate credit union.

Today, these OTTI losses have yet to be realized.  At this same time, the total capital of all remaining corporates is just over $1.7 billion. This $1.9 billion capital write offs by corporate owners of U.S. Central significantly skewed financial assessments about the system, its earnings capacity and its sustainability in the midst of the crisis.

By assuming the worst, NCUA put U.S. Central out of business, exacerbated the financial condition of the network and destroyed capabilities, careers and the spirit of cooperative ownership.

NCUA itself acknowledged the possibility of error in these loss estimates.  When the Agency placed U.S. Central in liquidation on October 1, 2010, it issued Claim Certificates for Member Contributed Capital to all of U.S. Central’s corporate owners.  The certificates state that the members’ capital depletion was “due primarily to the required recognition of unrealized investment losses based on projected future bond defaults.”

The certificates further state:  Under normal circumstances a member of USC is required to file a claim against the liquidation estate to recover its depleted capital on the basis of, for example, an ‘error in accounting estimates.”  In recognition of credit unions’ concerns about the depletion of their capital, however, the NCUA Board has chosen to issue this “Claim Certificate for Member Contributed Capital” representing the value of your PIC and MCA balances as of November 30, 2008.”

Using numbers in the right way

Another critical issue is that even if the numbers were “near right,” were they used in the right way? Or were they used in a manner to make a difficult situation far worse, destroying the unique cooperative liquidity solution that credit unions had relied upon successfully for over 25 years.

If losses in the next five to 10 years (some NGNs extend beyond 2020) approximate the OTTI estimates, by booking the loss and reselling the investments to Wall Street, the credit unions and corporates they own lost all of the cash flow and income possibilities from the securities.

Even though the OTTI estimates require individual securities to be written down, these securities continue to pay principal and interest in full until default occurs. For example, the cash flows from the remaining $2.3 billion OTTI reserve and balance in U.S. Central’s capital account would be almost $25 million per year if one assumes a yield of .75 – 1% on the potentially  impaired securities.

Credit unions do not have access to outside capital except from the NCUSIF. Unlike for-profit institutions, credit unions earn their way out of problems over time. That is exactly what was happening in the corporate network, which reported core earnings of $154 million in the first six months of 2010.

By the decision to push the workout not only outside the challenged corporates, but also completely outside the industry and owners of the opportunity, NCUA forced a guaranteed loss and eliminated the upside potential.  These new owners of the income stream have not just the collateral protection but an NCUA guarantee of their return—that guarantee means the credit union industry is still on the hook for any downside.

Setting a Relevant Regulatory Agenda for the Future

By reviewing the status of the corporate investments today, the importance of having regulatory decisions based on the unique capabilities and structures of the cooperative system is clear. Credit unions are not banks. The regulator and the industry have both the time and the latitude to develop solutions differently from the banking sector. That capacity must be defined and used—this is a responsibility for both NCUA and credit unions together.

Liquidity trumps capital in a crisis. As the former President of the Minneapolis Federal Reserve Bank Gerald Corrigan stated in a July 2 American Banker interview: “We know from centuries of history that when financial institutions get into serious trouble, the thing that ultimately does them in is loss of liquidity and funding.”  Without liquidity, all of the capital ratios become suspect because of the uncertainty caused when troubled institutions must sell assets to meet  funding withdrawals.

Continuing to innovate with cooperative designs has been an important factor in credit union regulatory oversight.  That need is more urgent than ever. NCUA’s actions have dismantled the unique cooperative liquidity safety net built around the Central Liquidity Facility and corporate funding.

The current monetary easing  has created a false sense of security.  The system’s counter-cyclical capability is at risk. Today credit unions are at the mercy of institutions whose primary purpose is not the sustainability of the cooperative model.   Many of these institutions failed to perform as needed in the last crisis.  Fixing this risk exposure should be the number one priority for cooperative leaders.

Hiring the Firm that Created the Problem

The irony is that when NCUA went to Wall Street for advice, it received banking solutions. Barclays Capital was the primary resource used by NCUA. The firm was paid over $33 million to implement the NGN program and $10 million to sell $10 billion of U.S. Central and WesCorp assets.

Yet, on July 10, 2013, a federal judge dismissed NCUA’s law suit against the same Barclays Capital.[i] The suit accused the firm of making misleading statements about $555 million in mortgage-backed securities sold to U.S. Central and WesCorp in 2006 and 2007. The suit was dismissed because it was not filed within the three- year timeframe required by law. So, Barclays Capital was paid twice over—once for creating the problem and then again by NCUA for solving it. Who is responsible  for these decisions?

The lessons of the corporate crisis continue to unfold. One of the most important is the need for a new leadership agenda at NCUA that would put cooperative principles and capabilities as the foundation of decisions.